From A Nation at Risk, 1983:  “We report to the American people that while we can take justifiable pride in what our schools and colleges have historically accomplished and contributed to the United States and the well-being of its people, the educational foundations of our society are presently being eroded by a rising tide of mediocrity that threatens our very future as a Nation and a people.”

The SAT scores since since 1967 clearly document the decline and tide of mediocrity referenced by A Nation at Risk .

John F. Kennedy said that the ignorance of one voter impairs the security of all, yet the issues on which America’s future hinges are irrelevant and incomprehensible to a huge swath of today’s electorate.  For forty years, ineffective public schools have flooded the population with voters who are low-information and without economic prospects.

Reversing American Decline discusses the impact of ineffective schooling, analyzes its causes, and proposes a path to reversing it that can be implemented today.

Reversing American Decline links America’s current economic, social, and cultural directions to decades of failed public schooling, especially to ineffective reading instruction.  A huge swath of the electorate has been excluded from the literate culture.  The problem is correctable but can’t be solved overnight.  Public awareness and community focus on local school board leadership are the keys to change.

The following documents offer additional support for those interested in addressing the reading crisis, including:

How well are your local schools teaching children to read?

Some say that children with social and economic disadvantages can’t learn. However, the Education Consumers Foundation’s analysis of data in various US markets contradicts that conclusion: there are schools in every market that greatly outperform those with virtually identical student populations. See here to review school performance charts in states across the US.

How Rigorous Are Your State’s Proficiency Standards?

Each state defines for itself what “proficient” means; some states have a rigorous definition, while others are less strict in their standards. To see how states compare, ECF has published charts showing the percentage of students deemed proficient in various subjects and grade levels and compared them to percentages reported for each state by the National Assessment of Educational Progress (NAEP, or “The Nation’s Report Card”), considered to be the gold standard. 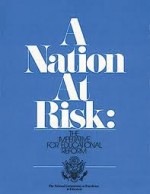 A Nation At Risk: The Imperative For Educational Reform

National Commission on Excellence in Education (1983)

Our Nation is at risk.

If an unfriendly foreign power had attempted to impose on America the mediocre educational performance that exists today, we might well have viewed it as an act of war. As it stands, we have allowed this to happen to ourselves.

We have, in effect, been committing an act of unthinking, unilateral educational disarmament.