The popular view is that the Newark reforms failed.  The New Jersey Department of Education data says otherwise.  Charter schools excelled and the projected reduction in dropouts and unprepared graduates district-wide will benefit taxpayers for years to come. 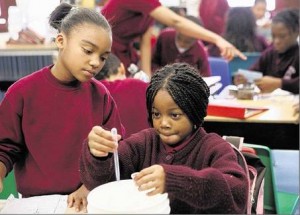 School districts and their boards often face seemingly insurmountable opposition to changes that would beneficial to students. Changes that would be upsetting to the established bureaucratic and institutional order are especially challenging, yet there are examples of impressive success in the face of insurmountable odds. The Newark, NJ schools appears to be one that succeeded despite being one of the most challenging projects ever. The massive effort took massive outside support, was riddled with controversy, opposition, and adverse publicity, students and their parents have begun to see benefits. Charter schools instrumental.

Despite the impression created by controversy and political turmoil, Newark’s school reforms appear to have significantly improved student reading outcomes.

Spurred in part by a $100 million grant from Facebook founder Mark Zuckerberg, the number of third graders proficient in reading has visibly increased since 2010—an outcome predictive of student success in succeeding grades.  Click here to view the school-by-school facts.

Schooling shifts from “learning to read” to “reading to learn” after grade 3.  In 2010 only 38.7% of third graders attending Newark’s schools and affiliated charters were considered to be proficient readers according to the standard set by the state.  By 2013, close to 47.5% were proficient according to that same measure, a 23% increase in three years.

Not that anyone has noticed.

If you believe the prevailing narrative, the Newark reforms were an embarrassing failure. Perhaps the most damning account of Newark’s travails is the May 19th article in The New Yorker by Dale Russakoff.  A quote from the President of the Urban League of Essex County seemed to sum up the entire effort:  “Everybody’s getting paid, but Raheem still can’t read.”

In truth:  Raheem is far more likely to be able to read than he was three years ago.

A smoother implementation might have produced better results, but over 350 more third graders reached proficiency in 2013.  The numbers may drop in 2014 because of the more rigorous assessments tied to the Common Core standards; but that change will mean that the goalposts were moved, not that the reforms failed.  By contrast, statewide reading proficiency rates in New Jersey have been dropping since 2011 according to the National Assessment of Educational Progress (NAEP).

In addition to the improved skills and improved prospects for hundreds of students, the improved scores are predictive of a reduced number of dropouts and unprepared graduates for the Newark school district. And according to our research, these reductions will have a significant impact on long-term government costs for public services.

According to the New Jersey Department of Education’s website, Newark public schools (including charter schools) enrolled 3,740 third graders in 2010.  Of that number, 1,449 were proficient.  In 2013, the number proficient had increased to 1,813 out of 3,813 enrolled—a gain of 364 students.

Using these numbers to calculate the percentage of students who were “partially proficient” in 2010 (61.3%) and 2013 (52.5%) and estimating the percentage that were reading at the “Basic” and “Below-Basic” levels*, we used our online calculator to project the reduction in dropouts and unprepared graduates, and the estimated reduction in government costs for health care, public safety, welfare, and education that would result.  The difference between the 2010 and 2013 cohorts was 31 fewer dropouts, 159 fewer unprepared graduates, and a future tax savings of $8.7 million per year.

Extrapolating Newark’s rate of improvement to 2020 and assuming that reading proficiency plateaus at that level (65.2% proficient), the Newark reforms would continue to produce 125 fewer dropouts, 503 fewer unprepared graduates, and a savings of $30.8 million in public sector costs for health care, welfare, public safety, and education per year.

Bottom line:  The accepted perception that Newark’s reforms were a monumental failure overlooks some very significant benefits to both students and taxpayers.  The thousands of students who would have otherwise not been reading will glean far more from their remaining years in school, ultimately saving taxpayers a projected $167 million—and those are the results from the first 10 years alone.

* New Jersey reports Advanced, Proficient, and Partially Proficient levels of student performance.  Most states and the NAEP divide the less-than-proficient students into those performing at the Basic level and those at the Below- Basic level.  Following the more widely used practice, we estimate the percentages of Newark’s Basic and Below-Basic students by dividing the percentage of Partially Proficient students into the proportions of Basic and Below-Basic students found in the statewide NAEP report.