Arizona: Comparing schools and districts based on student proficiency 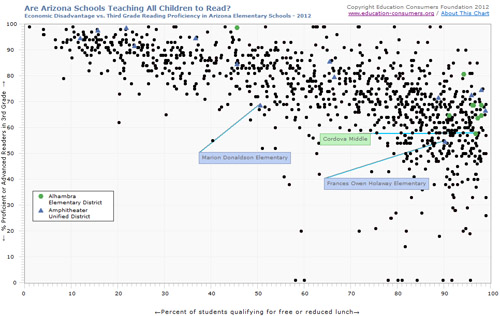 Analysis: Comparing schools and districts on third grade proficiency in reading and math
The charts linked below allow you to compare schools and districts in Arizona with their peers. The Y (vertical) axis shows the percentage of proficient 3rd graders in a subject; the X (horizontal) axis shows the percentage of students who qualify for the free or reduced rate lunch program, a common indicator of poverty in schools.

Note: In a small number of schools, proficiency was reported as <2 or >98.  This was changed to whole number 2 or 98 for graphing purposes.

Note: For 2014 and subsequent years, some schools in Arizona reported free and reduced lunch data in increments.  The chart displayed here reflects the lowest whole number in the increment.

Note: In November 2014, the Arizona State Board of Education adopted a new statewide achievement test, AzMERIT, for Arizona students.  Therefore, 2016 and subsequent assessments should not be compared to previous scores.

Comparing Arizona’s Proficiency Standards to the National “Gold Standard” (NAEP)
Each state defines for itself what “proficient” means; some states have a rigorous definition, while others are less strict in their standards. To see how states compare, ECF has published charts showing the percentage of students deemed proficient in various subjects and grade levels and compared them to percentages reported for each state by the National Assessment of Educational Progress (NAEP, or “The Nation’s Report Card”), considered to be the gold standard.