DC (Washington): Comparing schools and districts based on student proficiency 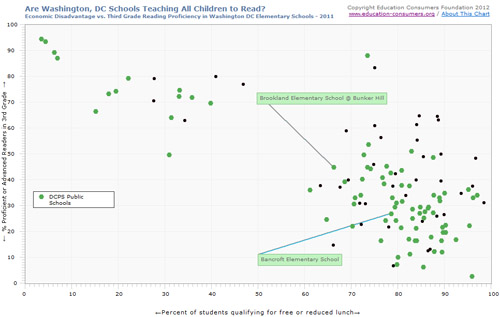 Analysis: Comparing schools and districts on third grade proficiency in reading and math
The charts linked below allow you to compare schools and districts in Washington, DC with their peers. The Y (vertical) axis shows the percentage of proficient 3rd graders in a subject; the X (horizontal) axis shows the percentage of students who qualify for the free or reduced rate lunch program, a common indicator of poverty in schools.

Note: At-Risk data was used for the 2018 chart.  At-Risk data is defined by the Office of the State Superintendent of Education of Washington DC as the following: For 2017-18 assessment reporting and accountability reporting, the subgroup for At Risk will be provided, which represents students At-Risk as defined by UPSFF and includes students who are homeless, under the care of the District’s foster care system, qualify for TANF or SNAP, or are high school students who are overage. OSSE is no longer reporting on Economically Disadvantaged for the 2017-18 reporting cycle. Economically Disadvantaged previously was calculated using multiple inputs, one being students eligible for free and reduced-price meals, including students attending schools receiving the community eligibility provision. This change was made to provide clearer information about school and student performance, as At-Risk is calculated at the student level, while the Economically Disadvantaged label can include whole-school designations, thus obscuring some nuances of individual student performance in the school. This change will ensure a clearer understanding of how each group of students is performing in a school.

Note: Washington DC began using the PARCC assessment in 2015.  Previous year results should not be compared to the 2017 and subsequent assessments.

According to recently enacted changes in the National School Lunch Program, school districts with more than 40% of certain eligible students will be able to dispense with the normal free and reduced lunch application process and provide a free lunch and breakfast to any student walking through the serving line. As a result, many schools in the District of Columbia and districts around the US may be reporting 99% of their students as eligible for free and lunch, whether or not that percentage would be supported by facts on the ground: http://osse.dc.gov/publication/2014-dc-cas-results

Comparing DC (Washington)’s Proficiency Standards to the National “Gold Standard” (NAEP)
Each state defines for itself what “proficient” means; some states have a rigorous definition, while others are less strict in their standards. To see how states compare, ECF has published charts showing the percentage of students deemed proficient in various subjects and grade levels and compared them to percentages reported for each state by the National Assessment of Educational Progress (NAEP, or “The Nation’s Report Card”), considered to be the gold standard.